Hope everyone had a great weekend! We went away to the Gold Coast for Marco’s pre-birthday. The weather was beautiful and warm. The beaches were busy and still open despite the king tides we have been having in Queensland. We stayed at the Jupiters Casino. We don’t gamble, but it has a nice rooms to stay and has a constant buzz of people. We could only stay one night, since Marco had to work today, but it was so nice to get away after such a busy 6 months with work and uni.

For lunch I persuaded Marco that we would check out one of the amazing vegetarian restaurants at the coast. We don’t have many vegetarian restaurants in Brisbane and I was excited to find a place where I could eat everything, even dessert. We decided on The Cardamom Pod, since it was the closes to our hotel. We were starving by the time we got there and we were blow away by what we found here.

It is situated on a main strip, next to lots of restaurants. However, for lunch this was the busiest place by far. The decor is bright and colorful  with lots of floral prints, antique ornamentation, mixed with beach furniture. I was a bit confused when we first got there, as there were so many people lined up in front of the counter ordering. I wasn’t sure if there was a menu or you just choose what you like from the window. As the people started moving we realized that you could chose hot and cold foods, which were on display or order something a la carte.

We ended up going with a plate that included a hot dish, rice and a cold salad and we got a few sides and a smoothie. So we got a Vegetable Lasagna and Paneer & Spinach Curry puff with Tomato & Mango Chutney for Marco. I had the Saffron Rice, Avocado and Cherry Tomato Salad with Roasted Sunflower Seeds, Tofu pocket and Rice paper roll. Our smoothie was fresh juice with pineapple, mango and mint. Everything tasted so so good. Marco was in awe and kept saying that this was the best vegetarian food he every had. 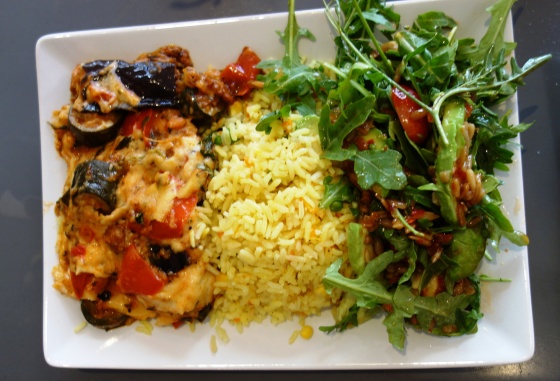 We couldn’t leave without having dessert. We were pretty full, but I can never say no to vegan desserts. They are such a rare treat. After speaking to the waitress we decided on a Raw Vegan Vanilla Bean Cheesecake with Almond Brittle, Cherries and Raw Vegan Tiramisu. Both were served with Cocoluscious Ice cream, which is also vegan. These had to be the best desserts we have ever had. You could not tell they were vegan or raw at all. The Cheesecake tasted just like a New York Cheesecake, it was also sugar free! I have been missing out on Tiramisu for 3 years. Although not a traditional Tiramisu, it was still creamy with the coffee flavor going through it.

So definitely if you go to the Gold Coast this is a place you have to visit whether you are vegan, vegetarian or a carnivore. Its classy, funky, delicious and very inexpensive. After this huge meal we waddled down to the beach to work it off. There were heaps of people about swimming and sun baking  The waves were huge though. Considering how far away they were the water came right up to us, nearly to our knees. I forget sometimes how nice our beaches are. I’m not convinced, like most Australian’s, that we had the best beaches in the world, but they are very nice.

After that we went to our hotel and settled in. We looked at the restaurants at the Casino, but they didn’t seem all that good. We ended up at Robina Town Centre and had dinner at Kouzina Modern Greek & Meze Bar. This is probably the 4th time we have been here. The menu seems simple, but the food is spectacular. Not a lot of vegan options though. Most of the vegetarian options were just replacing the meat with cheese. They did have a couple of entrees, but I couldn’t resist the fish. At this rate I am still a pescatarian. I don’t eat seafood daily, but I tend to get fish when i am out. I have stopped eating can tuna all together though. Health wise I feel that eating fish is fine is small amounts, but I don’t want it to be a complete substitute for meat. I feel fine after eating it, unlike when I eat other meats. After dinner we headed back to the hotel and ordered festive cocktails in the bar that we could take back to our rooms. We had a good sleep without the dogs or the kids behind us waking us up. Then we had our free breakfast buffet, which was quite average and drove home. Feeling a lot more relax after being away and really happy I discovered a new restaurant that I can take my friends and family too. 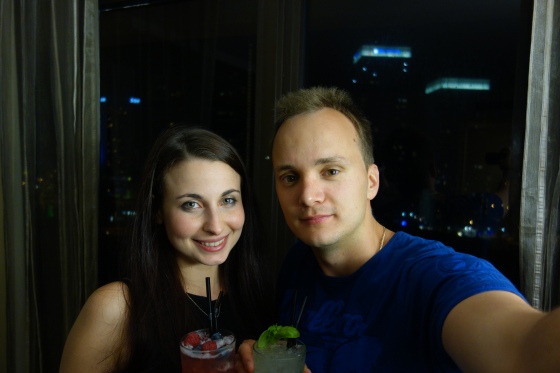