My mum had her big work christmas party that had she catered for and she has brought home so much fruit, salad and roasted meat. I am trying to keep away from the meat, as tempting as it is. Marco has been getting his meat fill in, although he was very jealous today of my veggie burger, while he was eating his roasted turkey burger.

I recently tried Woolworths new Macro Wholefoods Moroccan Veggie Burgers. For some strange reason they are not listed on their website or anywhere else. But I assure you that they do exist and they are really good. There are 2 or 3 other flavors  but I haven’t tried them yet.  I am a bit annoyed that Woolworths has now stopped selling  tofu and veggie patties in the fridge section and have replaced them with their brand own. Some are cheaper but most are more expensive and not organic.

Anyway with all this stone fruit that mum brought home I decided to make a slice with it. I had apriocots, plums, peaches and nectarines. Since I thought I didn’t have enough for the slice, I also added frozen berries.  Turns out I had plenty, so the amount could be reduced to 500 g and the berries are optional. I originally was trying to veganise a Donna Hay recipe, but since I didn’t really have enough or the right ingredients to do that I just used whatever I could find in the cupboard. It payed off and it turned out very good. It was not as solid as I thought it would be, the base is very crumbly, but it all looks the same in your tummy!

4. Place the mixture into the baking tray and pat down so that it is all even.

5. In another mixing bowl combine fruit with maple syrup.

6. Add the fruit to the baking tray. Push the large pieces of fruit into the base (but not too deep). 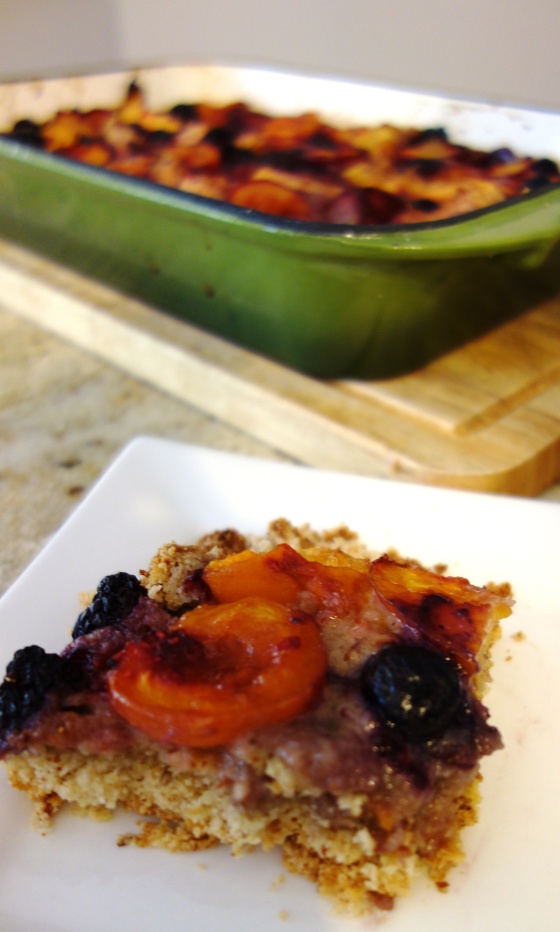