Today was such a stressful day. Marco and I had to babysit his 2yr old niece and 4yr old nephew from 9 till 2. That was actually quite fun. The stressful bit was meeting with my Italian lecturer after that to discuss my grades and getting an email from another lecturer that I should meet with him in 4 days to show all the work I’ve done on my thesis. If you have seen how much I’ve been posting lately, you can probably guess that I was taking my holidays a bit earlier then I should of. So today wasn’t a healthy day at all. It was peanut butter on toast, soy cappuccino, fish and chips (still having trouble saying no), soy ice coffee, then vanilla soy latte at uni. Luckily I saw a friend at uni, whose positively eased my nerves. Then after 2.5 hrs of meeting with my lecturer (which was not as scary as I though), Marco and Simon picked me up to go to Govindas.

I have been to the Govindas in Brisbane city a few times and loved it. That store has been there since I can remember. I was always curious about this ‘vegetarian’ restaurant, but usually opted for a McChicken or sushi roll for lunch. So when I saw a coupon last year I demanded we go. Since then I have been back a few times with friends and they loved it too. None of which were vegetarians.

Govindas is a Hare Krishna restaurant with 3 locations in Brisbane. They make vegetarian meals, but you can also opted for the vegan and gluten free options. I always get the vegan buffet, which includes Jasmine Rice, 1 or 2 mixed vegetable curry, Split mung dahl , Koftas balls with tomato and herb chutney, Pappadam, garden salad  and home made ginger & mint lemonade. I can never go for a second plate, it is far too filling. They also do a Halava (Semolina fruit pudding), which is included, but it has butter and a dairy custard, so I don’t order that. That only costs $12.90 or $10 for a student. So its very affordable if you are a student and very hungry. They do a few other specials like lasagna, pizza and occasionally I’ve seen vegan cakes as well.

So again when the coupon came up we bought two. Since the city is difficult to park, we bought the coupons for the Stones Corner location. This was our first time here. This restaurant is much smaller and in my opinion not as nice. But the food was still spot on. Our friend was impressed with the food, even though he’s a meat man. There was also another great surprise for me. Normally, I have to skip the dessert, but tonight they had a vegan option included. Also I got to have two curries, since both were vegan tonight. I didn’t have much room left after I ate everything off my plate and polished off Marco’s, but I made an exception for dessert. It was Apple Crumble with Vegan ice-cream. The girl took a while bring it and I was bit confused why. However, when it arrived I realised why. She had whipped up the most delicious coconut  ice-cream. By taste I think it was just coconut cream, ice and some sweetener. So I will be trying to recreate this soon.

So it was a well deserved meal for a big day. I really recommend this place, whether your vegetarian or not. You just have to love great food. There are Govindas in other states around Australia too. I would like to learn how to make koftas, halava and coconut ice-cream. I just need to buckle down for the next few days and finally end this semester. 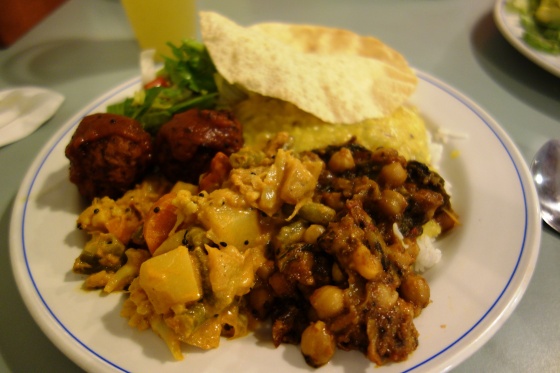 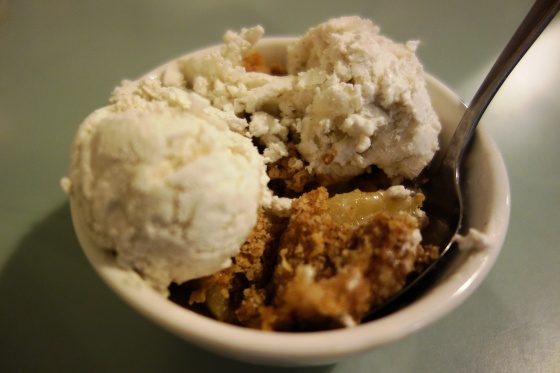